2016 has kicked off much the same as 2015 did, badly. My health hasn’t been great, I have managed to quite badly sprain my wrist which is hampering typing and all manner of other things. Hubby has come down with the norovirus, which I have escaped so far, which is good as we only have one bathroom and I can’t run as fast as him!

So my first blog post of 2015, I thought I would compose a picture post. I hope you enjoy it.

In January 2015 Willow needed quite a large operation to remove a tumour from her breast tissue. We were lucky that it was caught very early, probably because she adores her tummy being rubbed. Although once the tumour had been tested we found out the mass was 50% cancer, as dogs cancers are mixed it was part aggressive and part slow-growing, the other half of the mass was benign. There is a 50% chance of the tumour coming back so she is checked regularly by us so we can identify lumps quickly.

I chose this photo (taken from the television) as on the day of Willows surgery a Television crew were at the practice interviewing the vet who carried out Willows operation. If you check out the whiteboard in the background you can see the Willow’s name is visible and she was first down for surgery that day. Our little girl was famous for a few seconds that night. That day was the longest of our lives, we had, had to prepare ourselves for the possibility Willow wouldn’t be coming home. Breast cancer in dogs is very aggressive and spreads to the lungs very quickly. Before her surgery took place she had to have an x-ray to check her lungs were clear. If it had spread to her lungs the kindest thing to do would have been to let her go. As you can imagine Jay and I were a mess, until she was back home with us. It actually feels like it was much longer than a year ago.

This picture is taken from my blog post My Urethra Moment, when I learnt how to self catheterise. I was so proud I managed to do this and that it would mean I should be able to avoid acute urinary retention happening again. I wanted to shout it from the roof tops!

I posted this quite graphic post as I wanted to take the mystery out of catheters. Until I had to learn how to perform this myself I had no idea what it was all about and what the catheters would be like. Until then I had only had my catheters fitted by District Nurses, they were huge cumbersome things that I really didn’t get one with.

This picture was taken from my blog post Falling, it was the worst injury I suffered in 2015. I had already fainted after using the toilet a few days before this accident had happened and had been very lucky I hadn’t seriously hurt myself. My foot injury occurred due to a freak accident, slipping on the bathroom floor whilst semi conscious. The noise of me falling was so loud that I actually woke up my next door neighbours (we live in a small row of terraced housed with paper-thin walls). I didn’t just hurt my foot, after this fall I woke up at 4am with every part of my body screaming at me. Over the coming days I was covered in bruises in odd places. June was not a good month for staying vertical.

As I am so crap at taking photo’s on a regular basis (up until last month when I upgraded my mobile phone), some months, such as this one will have several photos not just one due to other months having none. 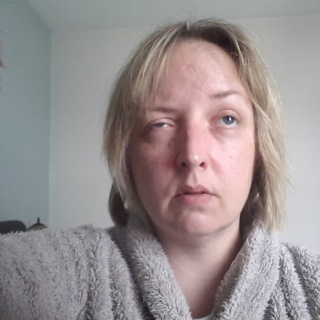 At the end of June Hubby and I held our annual BBQ, unfortunately as usual the party really took it out of me, so much so that Ptosis came back with a bang. I won’t lie it’s a bloody nightmare when this happens as I get double vision in the eye I can see out of and my forehead feels like it’s being torn apart. As you can see from the photo my left eyebrow is desperately attempting to keep the left eye open by arching ridiculously high. At some point the muscles will no longer be able to cope and then I lose my sight completely. All I can do then is lie down. I have had more bad Ptosis this year (I have it every day but usually it is barely noticeable) than I have in quite a few. It’s distressing as I feel physically deformed when it happens. 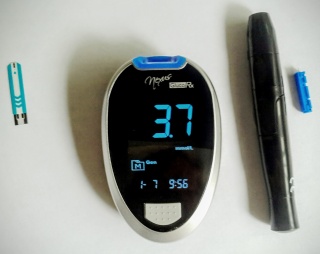 July was also the month that I found out that I was suffering from reactive hypoglycemia. You can find out all the details of how I managed to discover this in my post Women Glow.

September 25th was our Crystal Wedding Anniversary. Here is a picture of my beautiful bouquet of flowers hubby bought me and a small selection of our cards.

This is my favourite picture I have taken of Frankie all year. He was sat sharing the sofa with me as he usually does in the mornings, whilst the girls stay upstairs and sleep. He is my constant companion, looking after me when I am sick. Hence his nickname Nurse Frankie.

November was the month of our belated fancy dress party. The full blog post containing pictures of everyone’s outfits can be found here. It was a brilliant night and hangovers were suffered by all.

It was this month that I upgraded my mobile to a proper smart phone and I have been in love with it ever since. My old phone was very complicated to use and didn’t produce great photos. Some of these pictures are dodgy because my eyes can get very blurry, when taking the photo it can look crystal clear, its only later when my eyes are behaving themselves I can see what a mess the photograph is.

Due to Willow having a serious operation this month (further details in my blog post Willow) we had to forgo putting up our large Christmas tree and borrowed this smaller corner tree from my parents. We needed something that would be out-of-the-way and would remove the possibility of Willow catching her stitches on the branches. We fell in love with the tree as hubby didn’t have to rearrange the lounge furniture to accommodate it. My parents have kindly given it to us, so it will now be our tree for many years to come.

I have a bit of a problem with Christmas trees, I tend to change them on a pretty regular basis. Now with mum’s old corner tree added to my collection I have three sat in my loft. I think I have inherited my thing about Christmas trees from my mum, as she was always changing trees and still does. Her latest one is absolutely fabulous. Had I realised I would be doing a picture post I would have taken a photo to publish. My mum’s tree’s are always impeccably decorated and like her there is absolutely no tinsel in our house. 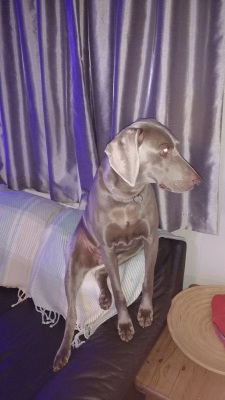 Willow recovered very quickly after her operation and once her stitches were out was pretty much back to normal. Above is a photo of her waiting for her dad to come home, desperate for her evening walk. 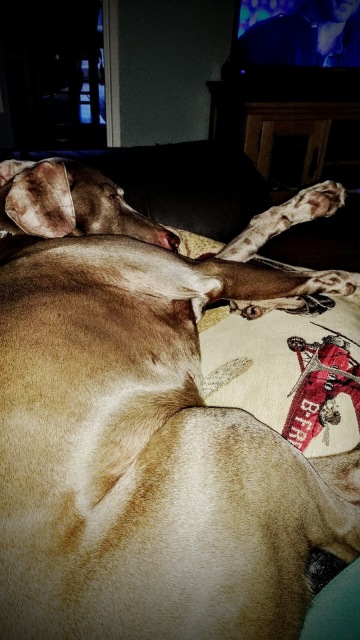 This is Mollie snuggled up with me on the sofa. Throughout December I found it was Mollie who got up with me through the night, my sleeping has been pretty terrible again. Frankie decided to stay upstairs with his dad, taking over from Mollie once Jay had gone to work. 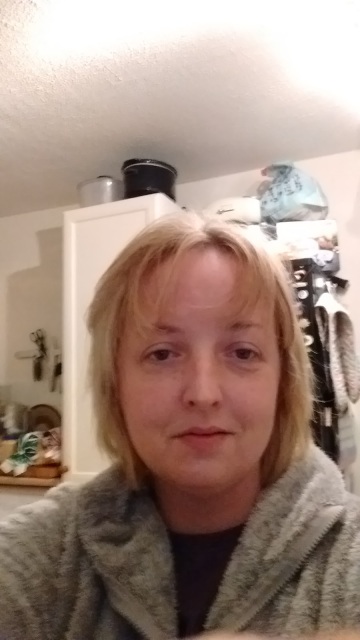 This is me Christmas morning waiting for Jay to get up so that we can open our presents together. I decided now that I can take selfies I would take more photographs of myself. I am what I call photophobic, my family’s photogenic genes have skipped me completely plus I have quite a distorted body image. The selfies are a kind of therapy to stop me being so hyper critical of my appearance. Anyone who is friends with me on social media knows up until August this year there had been very few photo’s of me. So it’s been quite a shock for them to finally see photographs of me. I still can’t stand myself in photo’s but the more I take and post the less sensitive of my image I am becoming. 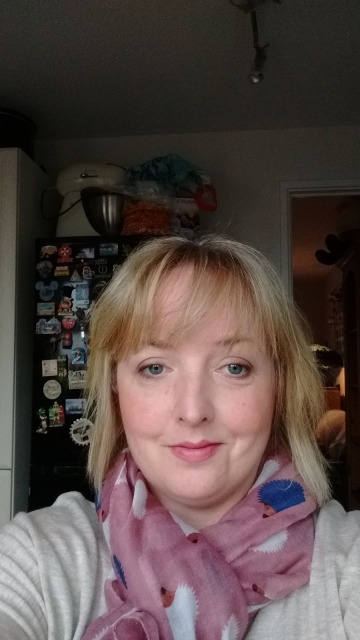 This is me glammed up boxing day (what we call the 26th December in the UK). I love makeup but I very rarely have the energy to apply it. Hubby bought me some lovely new face powder and makeup brushes, so I am going to try to make more of an effort this year.

On Boxing day we had a friend over for a few hours, the photograph below is me looking rank due to my chronic conditions and exhaustion. Quite a difference in 24 hours. By the time I took this photograph it was late morning / early afternoon, I had actually improved in appearance by this point. Christmas completely wore me out. 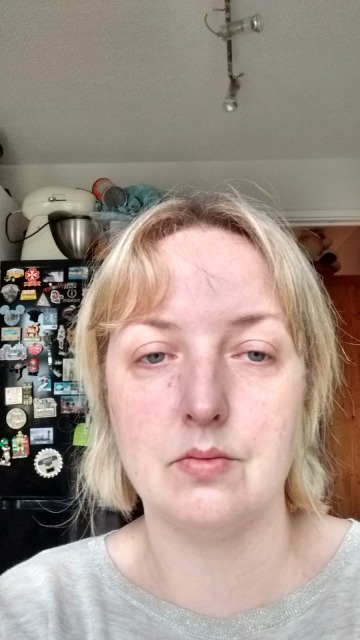 What people who don’t see me all the time don’t realise is that most days I look like this, pale and sick. I even look healthier in the picture from July where I have bad ptosis.

I won’t just be posting selfies when I am all glammed up but also when I look and feel my absolute worst. One glam photo doesn’t mean I am magically better or that I am pretending to be sick the rest of the time. I am hoping that this will raise awareness of invisible illness, although I would argue it isn’t that invisible and help me overcome my photophobia.

I hope you all had a wonderful time over the festive period (or as much as you could) and I wish all my readers a happy new year.