Over the last week I have been quite unwell, culminating in an emergency appointment at the doctors surgery yesterday. As is usual for me it wasn’t clear what exactly was wrong. I had severe abdominal pain in the lower right quadrant – I’m no stranger to abdominal pain, I have suffered with it for as long as I can remember. I can remember countless home visits by the gp where I was yet again diagnosed with a grumbling appendix.

I don’t think what I had yesterday was my appendix – its still sore today ( just not as bad). I think it is actually a cyst on my ovary, the doctors found one in 2015 but as it was only 2cm in size the protocol was not to monitor it. For years every few months I would get a pain in my lower right side. Loads of times I was convinced it was my appendix but after they found the cyst I realised that this made more sense. I started to track when I had the pain, it was always between the 20th to the 28th of each month and would last a few days. However over the last six months every two or so months the pain ramps up. I have a reasonably high pain threshold and it takes a lot to make me go to see the dr, let alone ring them up and demand an appointment. Normally I’m the patient running in the opposite direction.

Yesterday I couldn’t stand up straight when it was at its worst and when I was on the phone to the duty doctor I was curled up in a ball on the bed. I didn’t just have pain on the right side but the whole of my insides felt sore and were burning.  Thankfully the duty doctor agreed that I did need to be seen and set an appointment for an hour later. Thankfully Mr Myasthenia Kid was day off so he could drop me down there. I also had a pot to piss in ( ha ha ha ha!) my old gp used to give me a sample pot to use when I suspected I had a UTI. I forgot yesterday to ask for another one to replace it.

By the time I got to the doctors appointment the pain was already decreasing. I felt a bit of a fraud to be honest. Whilst I am typing the pain is ramping up again, I’ve taken pain killers so hopefully it will settle it again. I haven’t got a temperature and today I am not feeling unwell. I don’t feel right – I think all of us with a chronic illness or condition know when our bodies aren’t feeling right. Mine hasn’t felt right for a few weeks, initially I put it down to anxiety, stress, then the heat. But I know in my heart of hearts it’s more than that. It’s like the time I kept telling my old hospital consultant that I felt terribly unwell, I didn’t know what it was but he needed to listen to me. The arrogant twat didn’t, he sent me reluctantly for blood tests. Five days later I got a snotty letter telling me all my bloods were normal. Three days after that letter he had to backtrack because my prolactin levels were stupidly high. See I knew that something was wrong, never ignore your instinct about your health.

My urine was dipped and nothing was showing. I then had to get up on the couch and be examined. I knew it was coming, I made sure that front and back bottoms were scrupulously clean as I feared gloved fingers could be inserted into either orifice. Luckily I avoided that one! My stomach was palpated, as is usual the doctors always ask about the scar on my stomach. I’ve had a scar on my stomach since I was 3 and a bit. It’s been there so long that unless someone draws my attention to it I don’t remember it’s there. Now that will probably seem strange as it’s a horrific looking thing all thanks to EDS.

If I wasn’t such a lard-arse at the moment I may have taken a photo to show you. The scar runs from around an inch above my belly button to the top my pubic bone. It has healed very wide around an inch or more at the worst places and the skin is paper thin. I also have no sensation / feeling at all in my stomach about 2 inches either side of the scar as the nerves were cut ( I have had multiple surgeries). It’s caused me problems in the past due to burns. A few times I have ended up seeking hospital treatment as I have given myself a serious burn injury and not noticed until the skin has gone black. Like I said I have no feeling there.

The scar has also tethered at the end near my pubic bone. This means the scar tissue has adhered to the muscle underneath. It causes me no pain but means my stomach is divided into two parts due to the tethering.

I showed the doctor on my abdomen where the pain was, she felt it and I had to be peeled off the ceiling. At this point she told me that she wanted to ring the surgical team at the local hospital for advice as she felt it could be my appendix or it could be an ovarian cyst torsion ( meaning the ovary was twisting because of the cyst). Personally I thought with both I’d be in more pain than I was. I declined the call to the surgical team basically because I hate the local hospital. If I had been in severe pain, vomiting etc obviously I would have gone, I’m not an idiot. But I knew what would happen, lots of tests, no sleep, idiot medical professionals and sent home after being made to feel like a time waster. At this point all I wanted was my bed.

I made the doctor a solemn promise that should the pain intensify overnight that I would ring 999 and if it was bad tomorrow (now today) I’d ring them. She wasn’t totally happy but she knew I wasn’t going to hospital. I have to add here that even in that severe amount of pain my blood pressure reached the dizzying heights of 115/80 with a pulse of 95, oxygen 98%. When my blood pressure is normal ( doesn’t happen very often these days) when in pain I am normally in the 130/90 territory. So that just goes to show you how low my blood pressure has been of late. 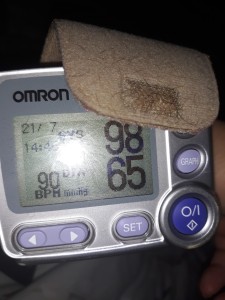 Its not desperately low but I am 5ft 8 tall and not petite. Most doctors take my blood pressure and you can see that they are looking forward to giving me a lecture about my weight and high blood pressure. You can see the disappointment in their eyes when it comes back low! If my blood pressure is below around 115/80 I can be hideously symptomatic, every time I stand up I feel faint. This week I have been drinking expresso’s as it’s the only thing that gives my blood pressure a boost, even if it is only temporarily.

Around 2.30pm the doctor I saw yesterday rang to check how I was. That was really kind of her but I feel guilty for making her worry. It wasn’t a quick call either, she had a huge list of questions to ask to ensure I wasn’t brushing her off and telling her what I thought she wanted to hear. This is why I love the small practice I use as they have the time to care about their patients, it doesn’t feel like a conveyor belt. If you need longer than your allotted time then you get it and none of the other patients mind as they also know they won’t be rushed out the door.

My plan is when feeling slightly better that I will make a doctors appointment and ask to have this pain investigated. Personally I wouldn’t be surprised if my ovary is stuck to my appendix due to all the adhesions I have.

I’ve been so rough over the last week or so I haven’t done very much in the way of sewing. I tried some hand sewing yesterday but couldn’t concentrate so gave up. Today I finished a Travis bag for one of my Instagram friends. Thankfully that was a quick bit of sewing as I had started it well over a week ago. I can’t put a photo up as she hasn’t received it yet. Jamie will be sending it tomorrow for me. The lovely lady and I have chatted a few times on IG and she asked me if she could send me one of her bags and give her an honest critique of her work, which is a bloody brave thing to do. The bag would be mine to keep. I couldn’t let her just send me a bag, as I knew she had a dog I thought I would send her a Travis bag.

This is the bag she sent me, 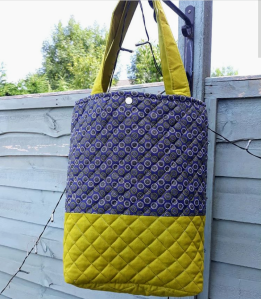 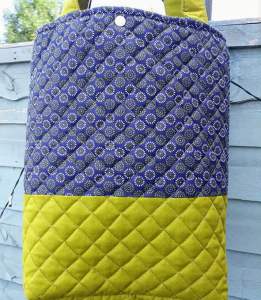 I absolutely love this bag. The quilting is amazing, she’s also used variegated thread so it goes dark and light which emphasises the quilting beautifully. I only wish that I could quilt as accurately as this!

What I have been holding my breath waiting for since the start of the year and all the bereavements we went through has finally happened. I knew at some point my health would be impacted and over the last 7 days it’s happened.

I’ve spent a few days in bed this week, purely because the chest pain on moving and the level of exhaustion was becoming unbearable. I really hate it when my health takes a nosedive as it can be months before I get back to where I was before. The same thing happened last year when we went through two bereavements in the space of 6 months. It took me from the May until the October to get anywhere near where I had been before.

I hate the feeling of helplessness and vulnerability this creates within me. I lose all motivation to do anything and just want to hide away from the world in the hope it will leave me alone. But it wont and I have to be a grown up and deal with the things that make me feel uncomfortable.

I am fed up with the professionals in my life telling me that my body’s  and minds response to this is normal, personally I’d prefer that they waved a magic wand and made it all go away. However I know it’s not going to happen so I just need to put my big girls pants on and get through this.

I am trying desperately hard not to fall down the rabbit hole and get seriously depressed. I won’t lie I am dealing with depression and anxiety at the moment. I have lost my sewjo, I have just been too exhausted and when I have tried to sew I’ve ended up with horrendous double vision. Sewing to me since October has been like breathing so to not be able to currently do it is frustrating. Hopefully it ( my sewjo ) will return soon and I will physically be able to do it.