On 24th January hubby (Jay) and I lost a dear friend who we had known for 20 years. Our loss pales into insignificance, a mother lost a son, a son lost a father, his girlfriend lost her soulmate.

Andrew touched so many lives and will be missed by so many people. 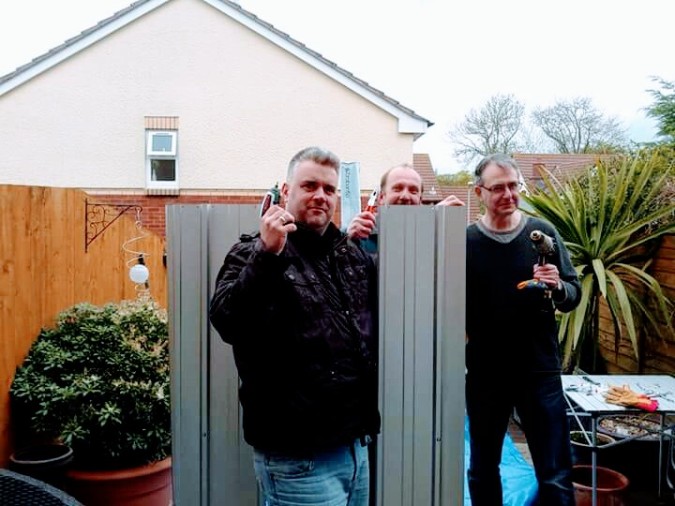 Last week was a bit manic by my standards, a gp appointment followed by a trip to hospital for my caffeine infusion. Add in visits from friends and a surveyor to look at the damage a water leak had caused (thankfully none but there is cosmetic damage as part of a wall had to be removed) it was too much for me. Most of these events occurred before Thursday’s trip to hospital, so when I wasn’t feeling well on Thursday I put it down to doing too much.

The caffeine infusion was a bit of a nightmare as my veins were not playing ball. If I am tired and cold my veins tend to hide and I knew that my blood pressure was low, so I was constantly drinking to try to give it a boost. After nearly a litre of oral fluids I managed to raise it to 112/83, I have no idea what the starting point was but I would hazard a guess of between 90/60 – 100/70 both of these readings although considered in the normal range make me feel rank, I feel better the closer I get to 120/80. By the time the infusion had finished it was reading 125/85.

The department was exceptionally busy and this wasn’t the day for a cannula insertion to take longer than the IV caffeine takes to administer (2 hours). The staff that have experienced my veins before now tend to run away, which means it takes ages trying to convince someone else to give them a go. What was more irritating was the nurse that had the second go, wouldn’t listen to me. She was one of those nurses who just ignores what the patient tells them and carries on regardless. Three failed attempts later she decided that a glove filled with hot water might be a good idea. In the end I had five different people attempt to gain IV access, it was a naval doctor who got a vein on his first attempt. However by then he was discussing with me why I hadn’t got a port to make life easier for them and me.

I had already discussed this with my neurologist, whilst he was performing the occipital nerve block injections (GONIs). He isn’t actually my doctor anymore having moved departments but is often in the unit where my infusions take place. So when I know when my next infusion will be I email him so that he can do my injections. The headache nurse that did them before doesn’t do them the way he does and I find his are much more effective. The upshot of the port conversation was that I wasn’t having the infusions regularly enough, the risk of infection and the fact that they hadn’t called down the vascular access team. Believe me that is only going to be a matter of time.

I did manage to run into my PoTs consultant as we were leaving the unit and I asked him about the possibility of starting melatonin due to my sleeping problems. As it was just a quick check on me to see how I was doing he asked me to email him to remind him. There are such good doctors at the hospital, who have no problems with patients emailing them when they have concerns. He is the doctor that writes the prescription for the caffeine infusion each month. I email him the week before to remind him and he emails me to let me know he has done it.

The day after a caffeine infusion are always a bust, I need to rest all day due to the travel involved and all the stimulation from the lights and noise. Friday I spent the day lying on the sofa, I put down not feeling great to the caffeine infusion and the explosive diarrhoea I had experienced at 1am (for over an hour). Initially I put the shits down to a stomach bug but having thought about it, the caffeine infusion can act as a bit of a laxative and maybe it was that as after the one hour-long bout I didn’t go again.

Saturday I was floored by vertigo and my heart kept doing funny beats, where it goes slow and then returns to normal speed. I felt so ill that all I did was lie on the sofa under my heated throw. I took some stugeron (travel sickness tablets) and that did ease it quite a bit but I was very limited with only being able to lie down, using my chromebook or phone was difficult. My blood pressure was also feeling low, I didn’t measure it, I rarely do now as I know what my symptoms are, plus it was upstairs and there was no way I would manage to get it. I ended up crawling into bed at around 6pm because the stugeron had worn off and the room was spinning. I looked ghastly, white as a sheet with big black rings under my eyes.

Sunday followed the same pattern, woke up feeling rough despite sleeping like a log. Now along with the low blood pressure, vertigo, funny heart beats and generally feeling like crap I had developed wheals on my face. I also felt extremely low like I could burst into tears at any moment. I put being low down to feeling so awful. It wasn’t until the late afternoon I put the pieces of the puzzle together.

When I saw my gp on Wednesday I had told him that I hadn’t had a proper nights sleep since the end of November. I had either not been able to get to sleep at all or slept for one or two hours and then spent the rest of the night awake. This sleeping problem was then triggering anxiety, an increase in pain levels and being bad-tempered. When I don’t sleep I find that my normal aches and pains are amplified by a factor of 100. This then makes me anxious and then continual levels of high anxiety can send me spiralling into depression. Having been severely depressed previously I didn’t want to go back there.

For about a year I have been taking the antidepressant mirtazapine (15mg) to help me get to sleep. Initially it worked wonders but over the course of a few months it was no longer working. My gp agreed with me to increase it for a month to help me get some sleep. I started taking the increased dose on Wednesday night, it worked beautifully I was falling asleep and staying asleep. However the start of me feeling really rough coincided with increasing the medication. After a quick search on Google it was obvious that the mirtazapine was what was causing the problems. Side effects listed included

And they were just a few of the side effects as there were many listed. So I dropped the dose back down to my normal 15mg on Sunday night to see what would happen. If I still had vertigo etc on Monday then I would contact my gp and see about stopping the mirtazapine altogether.

Monday morning however I woke up with my eyes very swollen 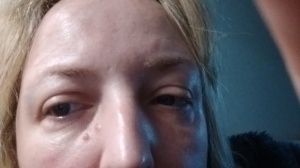 In these photos the swelling has come down considerably. My under eye area had been very itchy since Thursday which I had put down to dry eyes which is something I suffer from anyway. Monday morning I really had to stop myself from scratching as I would have scratched until I bled. I dosed myself up with antihistamines and then waited to see if the vertigo started again. The vertigo had been coming on 3-4 hours after waking up, so I bided my time before pronouncing a vertigo free zone. Thankfully the vertigo hasn’t come back since dropping the dose back to 15mg, my blood pressure is back to its low but normal state.

My gp rang me by chance on Monday and I managed to miss the call. He let a voicemail saying he had received an email from my PoTs consultant about starting melatonin and had written me a prescription for it. I rang the surgery back to pass on the message I had dropped the mizatrapine back down to 15mg due to the side effects I was suffering.

Tuesday morning there was no swollen eyelids which was fab and I had slept well due to the Melatonin I had taken the night before. I have been sleeping all night and feel more rested than I have done in a very long time. I still have fatigue but it’s no longer at the level it was when I wasn’t sleeping. I don’t know now if the mizatrapine caused the swollen eyes or if it’s something I have eaten. It could be anything at all as I can react to stuff and then the next time I have it there is no reaction.

So now I am back to my normal level of crappy health after four days of feeling truly awful and almost being confined completely to my bed due to the vertigo. At least however (touch wood) so far there seems to be no issues with the melatonin.