You may be wondering what on earth I mean when I say “Migraines the sneaky kind” up until last Wednesday, if I had read that I would have been scratching my head as well, because surely you know if you are having a migraine right? Well no not always, read on!

What I am referring to are migraines that disguise themselves as something completely different, so that they sneak up on you. Its not until its gets to the point where you are vomiting, avoiding the light (like some kind of vampire) and your usual pain medications arent working that you suddenly realise that what you are suffering from is a migraine and you’ve got so far into the attack that there is nothing left for you to do but ride it out.

On Tuesday 18th March 2014, I had one of these sneaky type migraines. I suffer with two kinds of migraines, classic migraines with an aura and Hemiplegic Migraines where I get no warning. With my hemiplegic migraines I wake up in the middle of the night with them.

http://www.webmd.com/migraines-headaches/what-is-a-migraine-with-aura this link explains the type of symptoms you get with a classic migraine with an aura.

http://www.migrainetrust.org/factsheet-hemiplegic-migraine-10913 this link gives a brief overview of the symptoms of a hemiplegic migraine.

I call them my sneaky migraines as when they start I don’t know what they are. I am awoken from my sleep with sinus pain, severe sinus pain that goes into my front teeth. Over the course of a few hours the pain increases to the point where I feel like my head is going to explode. I self medicate with sudafed (a type of sinus decongestant), nasal sprays and rinsing my sinuses out with warm saline. Nothing stops the pain and it just keeps increasing, I start to feel sick and then the light aversion starts. This is then followed by a feeling of numbness in my face and right arm, sometimes spreading into my right leg. Then suddenly I have a lightbulb moment and realise I’m having a migraine!

In 2009 or 2010 (sorry I can’t remember the exact year) I ended up being taken into hospital for 24 hours because I was so ill with a migraine. When I was admitted I was wearing dark glasses and had my cardigan wrapped around my head to block all light out (and yes I looked ridiculous but I just didn’t care!). The medics treating me were concerned I had meningitis or a bleed on the brain. All the tests came back clear, I was suffering from a migraine.

This migraine started in exactly the same way as the one on Tuesday night did. It disguised itself as a dry sinus infection. I was so convinced it was my sinuses acting up. So on Tuesday my sneaky migraine had fooled me for a second time.

I felt hideously embarrassed all those years ago that I had been hospitalised by a headache but then a migraine isn’t just a bad headache, as so many people that have never had one seem to believe. A migraine is the kind of headache where you would do anything to stop the pain, even if it involved cutting off your own head.

So why didn’t I recognise that it wasn’t my sinuses but a migraine that was masquerading as such? Well I’m not alone in getting the two confused the link below states in one study of 100 people that believed they had sinus trouble over 90 of them had nothing wrong with their sinuses at all, they were suffering from tension headaches or migraines
http://www.webmd.com/allergies/sinus-headaches

This link breaks the study down further
http://headaches.about.com/od/diagnosis/a/ahs_sinus_mig.htm

I only discovered all this after my migraine cleared up around 13 hours after the attack had started. I was angry with myself for not recognising the fact it was a migraine and I searched the internet to find out if other people had the same sinus symptoms during their migraine attacks. I found a wealth of information about sinus pain and migraines but this only fueled my curiosity. I needed to know why the sinuses were involved, what was the mechanism behind this. I came across this site which briefly explains why the sinuses are involved
http://migraine.com/migraine-types/sinus-migraine/

As soon as I found out this information I shared it on facebook as I had previously discussed dry sinus pain with a few friends. It made so such sense. Sometimes my migraines that involve my sinuses aren’t so dramatic. The pain is severe, but I’m not light sensitive. The attacks will still send me to bed and I will  vomit with them.

I could never work out how it was possible to be in so much pain with your sinuses only for it to magically disappear 12-24 hours later. During these attacks I would take decongestants and rinse my sinuses with warm water to no avail. I feel such an idiot! All this time I’ve had migraines with sinus involvement. If I had taken other pain medication I may have been able to reduce the attacks, rather than solider on thinking my sinuses were playing up again.

Im not new to migraines I’ve had them since the age of 8. Since that age they have been a mixture of classic migraines with auras and hemiplegic migraines with or without auras. By the time I was 13 years old my migraines were frequent and severe. I always vomited and I would always become paralyzed on one side of my body.

I have a memory of my mum taking me to see my gp as she ( the gp) needed to see me during one of my migraines to confirm the diagnosis. At this age I was several inches taller than my mother and probably around a stone heavier. I remember her dragging me along the road, how the hell she did it I will never know but she did. In the doctors surgery I was diagnosed with migraine and given a prescription for pizotifen / sanomigran a drug used to prevent migraines. The doctor also gave me a soluble pain killer and made me drink it there and then. Bad idea as I decorated the treatment room with an exorcist type vomit. It was then that the doctor informed me that I was also suffering with transient gastroparesis due to the migraine. She advised me that as soon as I got my aura warning me of an impending migraine attack I must take my pain medications, if I waited the pain killers wouldn’t work as for all intensive purposes my stomach would be on strike during the attack.

I am always amazed at how many Doctors and migraineurs that aren’t aware that your stomach becomes paralysed during an attack. It doesn’t seem to be very well known by either community, which is a dreadful shame as many sufferers could reduce the severity of their migraine if they took their pain medications as soon as the aura started. Obviously that only works if you get an aura, some people don’t.

Over the years my migraine pattern has changed. As a teenager they were frequent and severe. Even though at that point I had identified a number of triggers ; emotional stress, cola, oranges / orange juice, halls menthol sweets, lockets ( a type of lozenge for colds), scampi fries to name a few. As I grew older the frequency of the migraine attacks lessened. I could now go years without them. However when I did get an attack the migraines would be in clusters so I would have 2-4 in the space of a week, knocking me sideways.

I also outgrew my triggers, I still don’t cope well with menthol so avoid it, the only other trigger I have identified is emotional stress. From 2010 until 2012 I was migraine free. Unfortunately in 2012 I started on the medication fludrcortisone     (florinef) and the migraines came back in clusters. This was also a time of emotional stress which compounded the situation. When I stopped taking the fludrcortisone the migraines subsided but they were still more frequent than they had been in years.

I now manage to go several months between attacks. The last migraine I had was in November on my 40th birthday. It was a classic migraine with an aura. I’ve found with these type of migraines as long as I get my pain medications in quickly and can apply a hot water bottle to the back of my neck within an hour of having the aura I can limit the severity and length of the attack to just a couple of hours. On my birthday I ignored it, dosed myself up and tried to continue as if it wasn’t happening. I had a couple of hours where I felt pretty ropey but I made it out to my birthday lunch and had a few glasses of champagne for medicinal purposes!

With my hemiplegic migraines there is no escaping them. They will not be ignored, I just have to ride out the storm. Its the nausea and vomiting I find hard to deal with during these attacks plus the pain is just off the chart. They leave me depleted of energy for days afterwards with several severe headaches following afterwards. Thankfully I spoke to my gp on Wednesday as the migraine was starting to subside and was prescribed three types of suppositories. Two kinds of pain killers and one anti emetic as I can not hold anything down during one of these attacks. So if you are like me during a migraine it maybe worth talking to your doctor about being prescribed suppositories rather than oral medications that will not be digested if you do manage to keep them down.

With all things medical that I discuss on my blog – I am not a doctor, what works for me may not work for you. Also if your migraines change or increase in intensity then you need to seek urgent medical advice. What you think is a migraine could be a whole host of other lot less pleasant conditions such as a brain bleed, a stroke or meningitis none of which should be ignored.

And yes Nurse Frankie was glued to my side during the episode in case any of you were wondering! 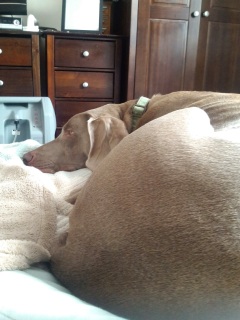 I should have said glued to my feet as he kept lying on them to ensure I didn’t go anywhere!