For a very long time I have had problems with my back. They first came to the fore when I was 16 and I started work. The job was physically demanding with lots of bending and lifting heavy items (I worked in retail). It wasn’t long until I started suffering from herniated discs and spending a lot of time at various chiropractor’s. I wasn’t diagnosed with Ehlers Danlos Syndrome (EDS) until I was 37, perhaps if I had received the diagnosis earlier I would have been better able to protect my back.

When I first raised the possibility of EDS being the condition that was at the heart of all my joint problems and autonomic nervous system dysfunction I was basically laughed out of the doctor’s office. I was told EDS was so rare that if I had it, I would have been diagnosed in early childhood (this from the same doctors practice that told me the pains in my legs that kept me awake at night were growing pains and I was 26!). The fact that my pulse raised by over 30bpm (and could actually double from 80bpm to 160bpm within seconds of standing) I was told was normal for your pulse to raise on standing.Which let’s be honest is factually correct, it’s just a normal person’s heart rate will rise 15-20bpm on standing and then go back to normal within a few seconds and mine didn’t do that.  I left that doctor’s surgery a few months later and joined another practice, where I would get the support to finally end the mystery of the lifelong pain I had suffered.

When I did finally get the diagnosis in May 2011, I was told my spine was the most hypermobile joint of my body. It made sense as out of all the joints in my body my back was causing me the major problems. Whilst working (I left in 2008 medically retired) I found I could not stand in one place for our twice daily meetings without the pain starting immediately. I would be shuffling from foot to foot, finding something to lean up against or on other occasions finding somewhere to sit down. Standing still was agony and it’s very difficult to explain to people that you can’t stand still, when we do it all the time. At this time I was walking our three dogs for over 20 miles each week, walking could be painful when my back was exceptionally bad but I could push through that, the pain was so intense on standing still I would do anything I could to avoid it.

Moving is important when you have EDS, if I do not move, change positions every 15 minutes or so my body can become locked in that position. Even a short car journey can leave me being unable to stand up straight. Spending a prolonged amount of time in my wheelchair can leave me being unable to stand or struggle to transfer myself into the car. Last year I spent an awful lot of my time lying down due to the CSF Leak (which by the way touch wood, touch lots of it, looks like it has sealed itself), whilst the lying down relieved the awful headache that accompanied the leak it has destroyed my muscle strength in the rest of my body, particularly my back.

For the first time in 12 months I can be upright but due to prolonged bed rest I can’t do the things I want to. My legs shake when I try to stand, my back causes me immense pain when standing. The only way I can explain the feeling is that it feels like I have a lead weight placed on the top of my head and it is crushing my spinal column all the way down to my tail bone. Even walking is painful, I no longer feel like I am walking upright but as if my pelvis may collapse under me along with the bottom half of my spine. My left foot is back to being numb along with parts of my left leg. I haven’t been in this kind of mess with my back since 2014. Then I started to do Pilates to increase my core strength, it worked really well and I dodged the bullet of needing a spinal fusion. I have arthritis in my spine and a flattened disc. It was important to me that I didn’t have the surgery yet because with surgery comes a whole load of other risks.

I know I should start doing Pilates again but I am scared. Performing Pilates in 2016 is what “caused” the leak. Well EDS causing weak collagen caused the dura around my spinal cord to tear but I was doing Pilates when it happened. Do I want to exchange the back pain for the return of the head pain and the answer at the moment is no. A few more nights of disturbed sleep will probably change my mind. I wake up in severe pain every morning, due to not moving much whilst I am asleep. My spine seizes up and it becomes very difficult to move. Quite often when I wake my back is in spasm, so I lie there like a turtle stuck on its back until the spasm recedes and I am able to move again. My core strength has gone completely and this is putting more pressure on my spine. It’s a mess, a painful hot mess.

It seems a very cruel twist of fate that whilst my head pain has gone now that I have self healed my leak, that I am now left with pain in another part of my body. No position is comfortable now, sitting, lying or standing it all hurts. I am back to spending life with a hot water bottle tucked down the back of my trousers or like at the moment sat on my heated throw, temperature set to sear!

As always I am trying to push through it, increase my muscle strength so that I can get back to somewhere near my level of normal again. There is no stopping due to pain as there is no comfort in it. My painkillers aren’t touching it, like most people with EDS I soldier on enduring levels of pain that would have others curling up in a ball crying.
Back pain sucks, it really, really sucks.

So last week was crazy busy, despite Jay and stating we were going to have a lazy week whilst he was on holiday.

As I wrote last week I had a surprise visit to hospital on the Friday for a caffeine infusion which I will write about more next week as the star of this week’s blog post has to be my husband Jay.

Back in May 2016 I set up a gofundme page to raise money to buy a new wheelchair and a power trike attachment so I could go off road and go out with my dogs on Woodbury Common, something I have been unable to do since 2008. As hubby and I were chatting one day trying to think up ways we could raise money, as like most people we don’t have a spare £5,000 lying around, I suggested that he should get his back waxed. He agreed immediately, now this is the man that needed gas and air for his travel vaccinations, who screamed the place down many years ago when he had his legs waxed for charity, so I was a little shocked when he said yes.

Hubby is hairy and it has never bothered me. If you had asked me before we met if I liked hairy men I would have said no. To be honest the only time his hair has bothered me is when it’s left all over the shower tray every morning looking like we have showered a black Labrador. It wasn’t until I saw the first video clip I realised how hairy he is, I suppose over 20 years I have just got used to it.

Within a few days hubby had it all organised and the sponsorship money was flooding in. Through doing this he has raised over £1100 I am so proud of him not just because of how much money he has raised but the pain he went through doing it.

Imogen, a very dear friend of ours videoed the back waxing for us. Unfortunately the complete version of the video is only available on my The Myasthenia Kid Facebook Page however we have managed to get the following videos onto YouTube. I also need to say a very big thank you to Abbie Wilson who did the back waxing in her own time and free of charge. That was so very generous of you Abbie and we really appreciate it. I need to warn you that the language in the video’s is a little fruity so it’s probably best you watch it with the sound down whilst children are present.

I just need to point out we are not a charity but a gofundme campaign. Apologies for my husband getting it wrong, I think the nerves kicked in.

It’s not too late to donate, we have set ourselves the challenge of a year to raise the money. If you would like to donate please use this link gofundme .

The things you do for love and a decent wheelchair, what next? 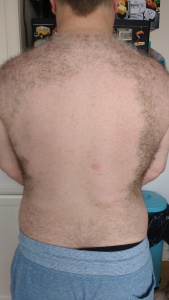 He has told me skydiving and abseiling are definitely out.