Welcome to the first post of 2020, doesn’t it just sound so weird 2020? I keep expecting someone to add in the word vision. This year will mark our 20th wedding  anniversary, it will also be 23 years that we have been together as a couple. How on earth did I get so old to be celebrating 20 years with someone. At 46 it now means that I have spent half my life with Jay and scarier still that 50 is looming ever closer!

A New Year can make you sit and take stock, it brings about all the New Year New Me bullshit but for those of us facing some bereavement anniversaries the only thing we ever want to do is just get January over with. The first anniversary of Frankie and Mollie’s passing was far harder than I could have ever imagined. I spent both days in floods of tears pretending I was ok to Mr Myasthenia Kid so he didn’t worry about me whist attempting to deal with his own grief. The day after Mollies anniversary it was the 2nd anniversary of my Gran passing and this year it hit me harder than the first.

There have been so many times over the last 12 months I have gone to ring her and got as far as picking up the phone only to suddenly realise she is no longer with us. I still haven’t deleted her number from our phones, it is the same with Andrews. Towards the end of this month marks three years since Andrew passed away and his number is still the first on both mine and Jays phone, along with the home phone. In the same week it is the second anniversary of losing Pam, one of my oldest friends I made in Exmouth and my next door neighbour twice. It would have been her birthday the week before. So as you can see January is an exceptionally shitty month for Jay and I. A month where we grit our teeth and try to just get through it.

Thankfully this year we have signed ourselves up for training courses for Dembe, so last night we had our first session of the advanced class. Dembe did really well and we got a bit of one to one time at the end with the trainer Martin as we are trying to get Dembe to walk, next to the mobility scooter with me holding the lead. I find this nerve wracking as I am always terrified that he will get too close and I will run him over. This bit of training is as much for me as it is Dembe. We do love going to training and Dembe enjoys it too. On Sunday we will be going to Agility Training for Non Beginners, this is a fun course which leads on from the agility course he did last year. He enjoyed it so much particularly the tunnels we decided we would do the next one on. It also gets us out of the house on Sunday and Dembe just loves going and doing something different. Our whole lives revolve around him, making him happy and providing a stimulating environment for him.

Thankfully we had a lovely Christmas despite knowing what the end of December and the whole of January would hold for us, with all those anniversaries. We received a truly wonderful gift from two of our friends, I burst into tears when I saw it ( I am blaming the menopause for ability to cry at the drop of a hat at the moment). It now has pride of place in our lounge and we have since added some more photos to the wall around it. 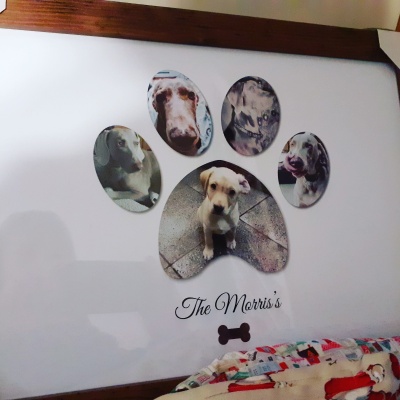 We were both so very touched by the thoughtfulness behind this gift. It contains a photo of ( going left to right) Willow, Mollie, Travis. Frankie and then Dembe at the bottom as a tiny pup. I can’t believe that this Saturday will mark the end of his first year with us, what is known as amongst dog people as his Gotcha Day. We will be celebrating his Happy Gotcha Day and we thank our lucky stars that we have such a wonderfully affectionate dog as Dembe.

Dembe was thoroughly spoilt by our friends this Christmas, it was crazy the amount of gifts he got and we are incredibly grateful to everyone who got him something. We certainly didn’t expect it.

Not in the photos, his Uncle Paul also got him a new food bowl, Sam gave him a tin of sardines which he had for breakfast Christmas morning, some tennis balls and a bone shaped chew, he also got bags of treats from various people as well. He was a very lucky little pup. We got him the huge tugger you can see in the photo, along with the grey puppy. We also got him a pop up tunnel which he went through twice on Christmas morning but has flat refused to do it again. We are hoping after Sundays agility class he will be happy to go through it again.

I planned to do as much of a #memadechristmas  as possible. At times it was incredibly stressful, wondering if I would manage to get it all done. I did and thankfully all my gifts were really well received. I also made the majority of Jay’s gifts, which was a bit of a nightmare as I am useless at keeping secrets and nearly gave the game away on so many occasions. Also I was using the day time to make presents for family and friends, whilst at night in bed when I was watching TV or couldn’t sleep I was crocheting him a hat and scarf set. I can’t remember if I have said anything on my blog about the fact I have been teaching myself to crochet since November 2nd. When Jay opened his hat and scarf from me, he didn’t initially believe that I had made it. The only way I could get him to believe me was to ask him to find the labels on them. He was thrilled with them both. 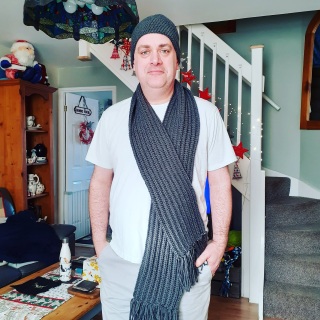 As he worked Christmas Eve I let him open one present from me, purely as I couldn’t wait to see his face. This was another gift that I had been working on in secret, a quilt made from a pre-printed panel ( so not cutting / patchwork ). He had seen this panel on several occasions when it had been featured on the now defunct Sewing Quarter tv channel, every time he had raved about it and what a lovely quilt it would make. I purchased it in secret and then when I could worked on it. He was over the moon with it.

Christmas was a bit of a Dembe and Daddy “love in” which was a gorgeous to see. Dembe loves it when his daddy is home and makes a real fuss of him. He is my dog but he loves his daddy very much as well. I managed to get this shot of them on Christmas morning

Dembe sat on Jays lap as often as he could during Jays time off form work. They really are devoted to each other.

I had some really lovely gifts from friends and family. I took part in a Secret Santa organised in a Facebook group I am part of and received a pattern – The Humbug Bag and some beautiful fabric ( and some zips). 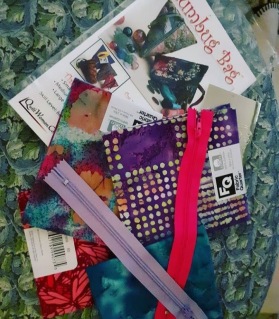 From Jay I got a little travel iron – which I had asked for to help me when I need to iron small pieces of fabric or small seams on quilts. Ironing is a bit of a nightmare for me so anything that makes it easier for me is brilliant, I hate having to wait for help. I also got two books on crochet,

And I have already made a small dog from the book – a weimaraner, it looks dog like but not Weimaraner like but that is down to my skills at crochet that need a lot of practice.

I am currently working on a giant Labrador made out of chunky wool. It is HUGE! Dembe keeps barking at it as he wants to play with it. Currently it is limbless and ear less, although I have embroidered his nose on. Which is what is probably making him bark.

We got so many lovely presents we really are very lucky to have such lovely friends who spoil us alongside our families.

Even with all the gift making I managed to gift myself this Christmas Quilt which I made on my embroidery machine. I am very proud of it as it is the first quilt I have done on it and until October 2019 I had never done applique on my Embroidery machine as the thought terrified me. 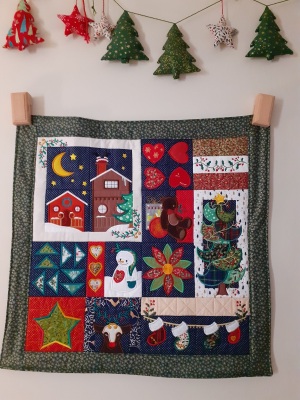 I was very sad when my quilt had to be packed away along with all the other Christmas decorations but I am really looking forward to getting it out again later on this year.

I hope that those of you who celebrate at this time of year had a wonderful time. Wishing you better health, happiness and peace for 2020.