Well I am still not feeling the blog. I don’t know what’s going on but I am really finding it hard to come up with stuff to write about. I am spending 7 days waiting for inspiration to strike and it just isn’t happening. By Tuesday each week I am in a bit of a panic, I like to try and write on a Tuesday if Jay goes out running errands. If not I will wait until Wednesday morning but I don’t like leaving it until Wednesday as I always panic if I have a migraine or something and no blog post is produced.

At the moment the days are just merging into one. I haven’t seen any of my friends for over a month although I keep in regular contact with some of them. I have come to realise over the last 8 months that some of the people that I thought for there for me, disappeared when Frankie and Mollie passed away.  I understand that everyone has their own lives and families, with their own shit to deal with but it has been a very isolating experience. Some people have made a supreme effort to be present and other well not so much. It’s ok as I have a long memory and will be sure to return the favour when the shit hits the fan in their lives. I didn’t expect to be visited constantly but the occasional text message would have been nice, especially when they know my situation of living alone and Jay working.

Thankfully though I am pretty self sufficient, whilst dealing with my grief, I was juggling a new puppy and attempting to find time to sew / embroider. It hasn’t been easy but Dembe and I have found a new routine that works for us. He is pretty good at entertaining himself whilst I am busy sewing. He always positions himself in a location where he can keep an eye on me and ensure he knows if I have moved. He likes one of three places, the bed by the washing machine, the sofa that looks into the kitchen or out under the gazebo on the bench surrounded by all the cushions. I can’t believe my luck that he doesn’t get bored and then start destroying things. When I have finished sewing he knows that is our time and I will ensure I spend the time playing with him, doing training or just cuddles depending on his energy levels. I have been blessed with a pup that is so very well behaved and so very loving. His favourite spot for sleeping is right beside me on the sofa. This is him right now as I am writing this post.

My life has totally changed this year, I have re-assessed a lot of relationships. I have made the decision that I won’t swim an ocean for people who wouldn’t jump a puddle for me. I have decided that instead of worrying about what everyone is thinking or saying about me behind my back and believe me you’d be surprised the shit I hear being spoken about me by people who should know better, that I shall just carry on living my life and enjoying myself. The best revenge on those sad twats is to enjoy yourself and plaster it all over social media. It totally then fucks up all the fairy tales that they have been telling people for years.

I am also getting out of the house a lot more, this does have to be limited and planned for. I haven’t suddenly magically got better, it is just with one dog things are a lot easier. Especially as Dembe is such a friendly dog and on the whole pretty well behaved, although we have now hit the teenage years and recall seems to be a take it or leave it thing! Fatigue still grinds me down. I like using my energy for things for things that make me happy. So using my mobility scooter on Woodbury Common and getting out with Jay and Dembe has been unbelievably healing and grounding.

It has been the one thing I have missed most since I got sick. The wheelchair trike although brilliant is an absolute ballache to transport. The wheelchair is fixed framed so that would take up the whole boot and then I would have to juggle the trike attachment with me in the front of the car. Not exactly safe. Then I piled on a load of weight when I developed my CSF leak and was virtually bed bound for a year, then in 2017 and 2018 we suffered a number of bereavements and I tend to self medicate with gin, chocolate and junk food / takeaways. I was 5 stone over the optimum user weight for the trike. So anytime I did try to use it the battery drained in minutes. I’ve been too embarrassed to say that because I allowed myself to get fat as fuck, I haven’t been able to use it. Hopefully now I am back losing weight ( it’s taken me until the last month to feel like I can actually do it) and I am back to 3 stone down, ideally at least another 3 to go so I will be massively under the optimum user weight. The trike will be used in the future as it is more suited to the rough and rugged environment of the common.

I do love my mobility scooter though and it has given me back my independence. It is easily taken apart to it can fit in the back of the car. It makes life so much easier if I need to go to the doctors or the hospital for appointments.

Over the 2 months I have got back into sewing and actually enjoyed it rather than feel I am going through the motions. From January until June I made a bloody good show of pretending I was ok, ensuring I used my embroidery machine every week and appeared to be enjoying myself. At points I felt like I was dying inside. I felt like a shell of the person I was. I didn’t feel I could voice the pain I was in. I know others struggle with grief especially when it is over an animal and not a human being.  Like I said earlier it has been one of the most isolating experiences of my life. There just felt like there was no one there. I do wonder if there had been someone their if I would have still felt so isolated.

I do have a tendency when things are tough to disappear into myself and attempt to shut out the world. I still kept on posting on social media, I still kept the creative things going but in all honesty I was going through the motions. It is only now that I can watch anything remotely sentimental without breaking down immediately. I only now feel like me. I feel like I have been on some weird journey where at points I lost myself. It is true what doesn’t kill you makes you stronger because in January / February this year I honestly thought the pain would kill me or I wished it would.

So I skillfully went off on a tangent there, I am enjoying sewing again and being creative rather than having to force myself to do it in the hope at some point the joy would come back. I am still working on my scrap busting quilt sew along. I found out yesterday that it is between a double (bed) and king size (bed) size, so it definitely is the largest one I have ever worked on. I made the back panel for it yesterday. 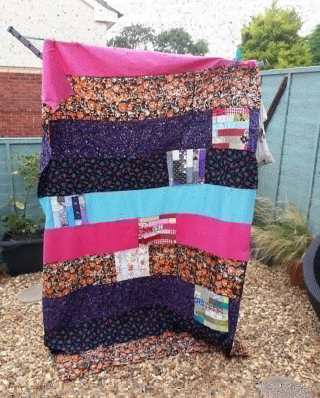 And in case you have forgotten what the front looks like

This morning I sorted out the wadding ( what you call batting in the USA ) which needed sewn together. I also made some plastic templates  to draw around as I have decided to tray something totally different with the quilting. It has taken me a few days of mulling it over to come to my plans. I have drawn it out so I have something to refer to. I now just need to have Jay clear the floor space in the lounge so that I can put my quilt sandwich together quilt back + wadding / batting + quilt top. I use temporary basting spray to hold it together but as it is so large I will also be pinning it. This ensures that the fabric stays nice and flat so it doesn’t shift and give you puckers. I also managed to sort out the binding yesterday. So it is all ready to be quilted shortly. I will be quite glad when it is finished now as I hate half done projects hanging around. I am really ready to now get myself into new projects and stretch my skills.

Anyway I started with no clue where this post was going and have managed to ramble on forever! 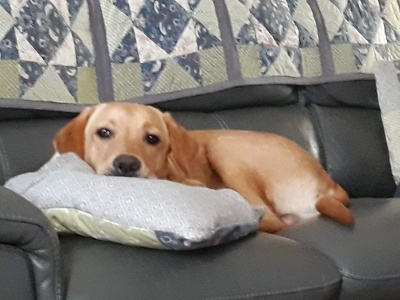 He likes it so he knows exactly where I am in the house at all times.

I think this year I have learnt, a lot and we are only in August. My heart has hurt more than I ever thought possible without keeling over and dying. I have learnt in the depths of grief you are still able to love unconditionally and you must never feel guilty for that. I have also learnt that the majority of people run away from grief and think that is acceptable behaviour. Despite all this I have come back stronger, love another dog more than I ever thought possible but when you have this gorgeous mutt in your life how could you not? 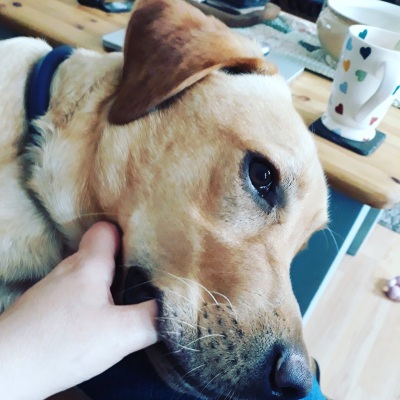 And yes he is holding my thumb in his mouth!