I got diagnosed with dry eyes over ten years ago, it could have been 15 years ago, I just know Travis ( our first Weimaraner) was alive then. How I found out I had dry eyes was due to the fact a cigarette end had blown into my eye whilst we were in the car. The agony it caused I will never forget. I had a burn to my cornea and thankfully no lasting damage but a few weeks later my eyes were feeling very sore so I took myself off to the eye infirmary where I had a few tests and found out my eyes were incredibly dry.

On and off for years they have been treated ( very poorly) with the first line treatment for mild cases of dry eyes hypomellose. That treatment in all the years I have been taking it does nothing, the liquid evaporates off my eyeball in a matter of seconds and I am back to the sore, itchy burning feeling I basically put up with 24/7. On the odd occasion when I have made a fuss I am given lacrilube to use at night, which is alike vaseline for your eyeballs. It is fabulous stuff but it means you can see fuck all for hours once it has been applied so has to be done when you are certain you are going to sleep.

I have brought up with numerous doctors that my dry eyes were getting worse, that I am waking up with crusty eyes that then burn and sting for the rest of the day. For some reason I just haven’t pushed this and have allowed myself to be fobbed off with the excuse that it is my medication causing my dry eyes as if this is in some way my fault. I am now coming off all medication that causes dry eyes – even though I have been put on these after the diagnosis of dry eyes was given.

On Sunday morning I woke up with with my eyelid stuck to my eyeball. That is as grim as that sounds. Only I didn’t twig what was going on until after I rubbed my left eye and it felt like the top surface of my eyeball had been removed. The pain caused my eye to water profusely. I also worked out that this has been happening for months to a much lesser extent, I keep waking up with a searing pain in my eyes, my eyeball has been sticking to my eyelid.

I realised quite early on, that I had an abrasion on my cornea but I just didn’t want to have to go to the local minor injuries unit with the high probability that they would send me onto the eye infirmary. I foolishly thought how bad could it possibly get ? I decided that I would ignore it in the hope that the pain settled because ignoring it has always worked so well in the past. We decided that we would take Dembe up to the local supermarket to give him some experience of dealing with a shop environment, noise and large volumes of people. He handled it like a pro and we were both so proud of him. 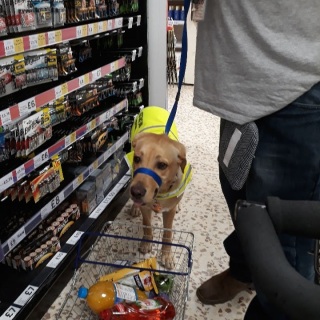 He is walking like a dream and has stopped jumping up at me when I am on my scooter. He now sits beside me and waits for me to give him a cuddle.

My eye pain was ok as long as I was 100% distracted, so I threw myself into binding a quilt I had made for Jamie aka Mr Myasthenia Kid. I wanted to get it finished and he wanted it finished and on his bed! I managed to get that done but as soon as I finished and no longer had anything to distract me the eye pain ramped up by about 500. 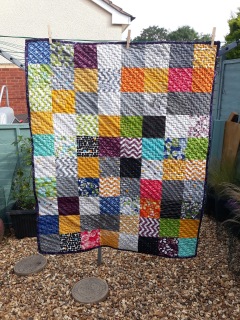 I actually waited until Monday to take this photo.

We decided we would start watching season 3 of Stranger Things. I sat with a hot compress on my eye because my logic was the heat would help it as they advise a hot compress with dry eyes. I was kidding myself still that the eye pain was dry eye and would settle. I lasted 20 minutes until I asked Jay to take me to the local hospital where they had a minor injuries unit. I knew (well I hoped they still had it ) that they had all the kit for an eye exam, I kept my fingers crossed that they wouldn’t insist on sending me to the hospital and the eye infirmary. As I knew the wait would be horrendous and sitting up like that for several hours would knock me for six.

Jay dropped me at the eye infirmary and he took Dembe out for a walk. I am extremely grateful that I was seen within 20 minutes of arriving. It wasn’t busy but there were other people coming in with more serious issues than I had. I was ushered in but immediately told that they would only do a basic eye exam and then send me to the main hospital as I had Ehlers Danlos syndrome. I questioned this as I knew it was just an abrasion and no need for the trek to the hospital ( one I hate due to a couple of twatish doctors based there). I was informed as the eye is made up 100% of collagen they couldn’t mess about. I was shocked that this nurse was so on the ball with EDS. Normally they are clueless, not their fault if they have never come across it I must add.

I made a few grumbling noises along the lines of its just an abrasion there is nothing wrong with the rest of my eye and that sitting for hours up there would make me much sicker in the long run. I had an eye test which I think I did reasonably well or well enough to convince her I wasn’t in danger of losing my sight imminently. So she acquiesced and did a proper eye exam. The local anesthetic stang like hell, it felt like I had a million paper cuts on the surface of my eye and she had poured vinegar on it. Once the stinging wore off it provided me with a lot of relief as the pain was dulled massively. She had a look at the structure of my eye which was all sound. She then added the lovely yellow stain that they put in and immediately could see I had a superficial abrasion right across the centre of my eye. I hadn’t been able to pinpoint where the pain was coming from my eye hurt and hurt more every time I had to blink. It made sense that it was right across my eye. 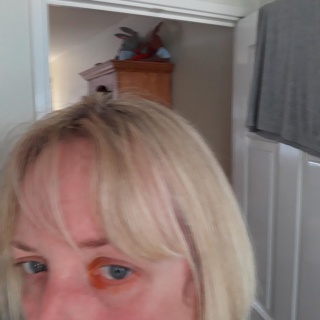 Me when I got back from the minor injuries unit. I was given antibiotic ointment, as my eyes were so dry it would provide some relief as it has to be put in 4 times a day. I was made to promise that if it wasn’t any better the following day I had to head to the main hospital and get it checked out. Thankfully it was an awful lot better the following day.

I have an appointment with my gp next week that I had booked for another reason – which I will still be bringing up! By the time I go to my appointment the local injuries unit would have informed them that I had an abrasion on my cornea caused by my eyeball sticking to my eyelid and that my dry eyes need to be treated! However as it is more than a week away I have spent £30 on dry eye ointment for night time to keep my eyes moist and to prevent them sticking to my eyelids again and some much stronger eye drops that should provide more relief than the tap water ( sarcasm but that might as well be what it is) I have been prescribed up until now and that someone saw fit to remove from my repeat prescription list.

My eyes are still quite uncomfortably dry, I am awaiting my delivery of the day time drops as nothing I have here if I wish to be able to see at all will provide any relief. When people say they have dry eyes unless you have experienced it you would never realise how bloody painful it can be.