I try not to write an awful lot about Dembe on here mainly because he has his own blog The Dembe Diaries . However there will be times when I do write about him because he is such a huge part of my life. I really can’t believe how much I love the little guy as initially I was too scared to give him my heart completely. Talking to Mr Myasthenia Kid he said the same, he didn’t want to be hurt or feel the pain again in the future ( a very long time away we both hope obviously). The problem is this little guy is just so loving and so utterly devoted to the pair of us.

As the weather had turned warmer we decided that we would get Dembe a paddling pool. We had been looking at various different types but it was pretty clear we would need something that was going to withstand puppy claws. A child’s inflatable paddling pool would spend more time having punctures repaired than actually filled with water. I saw my best mate on Instagram had got her dog a rigid paddling pool which was exactly what we were after. I found out where she got it from and we bought one the next day.

We had no clue how Dembe was going to react to a paddling pool. At the moment he will not walk through puddles on the common but if the shower is on he will dive in. He will chomp on the water coming from the hosepipe so his aversion to puddles is a real mystery.

We needn’t have worried as he went absolutely crazy for it. The video was shot as it was being filled for the very first time. He stayed in the paddling pool ( jumping in and out) from 8.45am that morning until gone 2pm when he finally came back in the house and went to sleep for two hours. He had paddling pooled himself out!

Jay decided on Thursday whilst he was at work that Dembe needed some artificial turf placed around the paddling pool so he didn’t slip and slid on the patio slabs. He was running around like crazy on Thursday morning and we were worried due to his over excitement he was going to have an accident. At least with the artificial turf in place it would soften a fall and give him somewhere else to lie down outside when he wanted to chew a bone / frozen carrot. 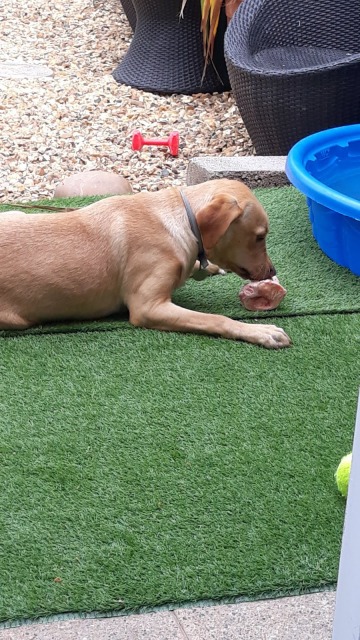 Since the garden has been revamped he has loved being able to go outside and play. He has also taken over one of the garden chairs and is using it as his sunbathing area. 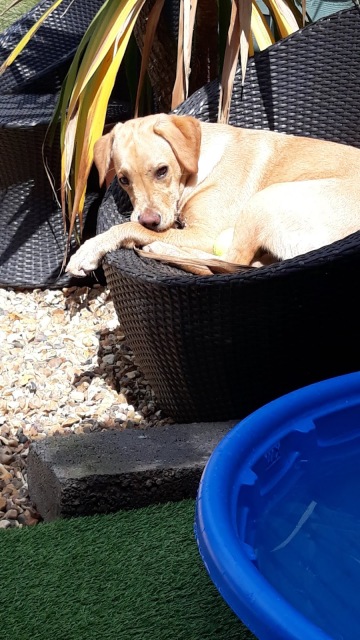 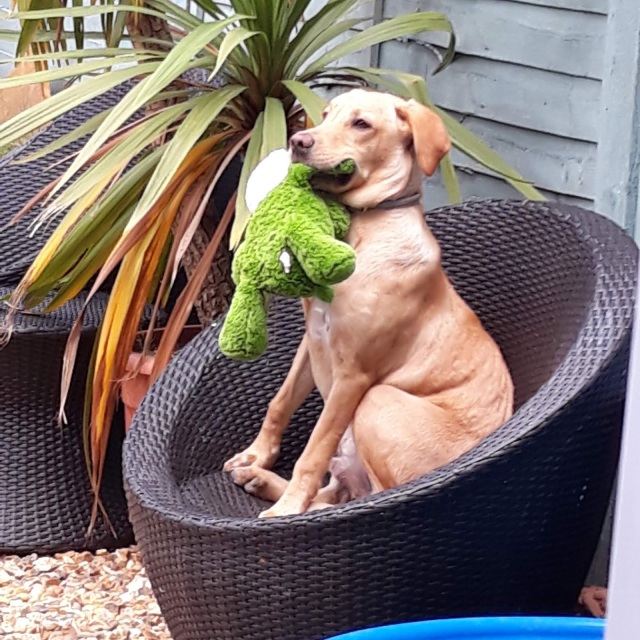 I took the photo above yesterday. Green crocodile is one of his favourite toys, he loves soft toys and has loads of them. On Monday night he managed to drop well actually he threw Crocodile into the paddling pool. We had been expecting it as he likes to toss his toys up in the air and then chase them. I had to put crocodile in the wash and I had just given it back to him . I was in the kitchen and Jay was in the lounge, I looked outside and fell about laughing. He was sat there as proud as punch with crocodile hanging out of his mouth. 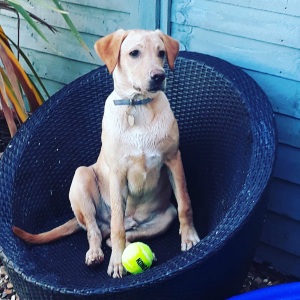 Dembe makes us laugh so much everyday. He has such an enormous personality. He is such a loving dog and also so very clever. Last week I taught him how to remove my socks and he now does this every night for me.

I did make the mistake on Thursday evening of asking Dembe to take my socks off whilst I was sat outside. He took them off and then proceeded to dump in the paddling pool. Lesson learnt, only get your socks taken off in the house!

Next week we will be starting his obedience training classes, I am excited and nervous at the same time. I know that he is reasonably easy to train so I can’t understand how Mr Myasthenia Kid can’t get him to walk to heel. I also want to get him to be able to walk alongside my mobility scooter and for me not to have to worry about running over his feet. I am also worried that the class will wipe me out as it is held in the evening and my ability to join in with a lot of it is going to be severely limited. However it is really important to get the lead work sorted, so my fears will have to be overcome.

Dembe brings us so much pure joy everyday, I am so glad we have him in our lives.