For the last ten years I have written about how much I hate October and how this month always fills me with sadness. This year is no different. In some ways it is worse.

This morning (17th Oct) I woke up sobbing, as today is the 12th anniversary of our beloved first dog Travis’ passing. He has been dead longer than he was alive, just under three years. The pain today is as raw as it was on the day we said goodbye. Why it is so bad today I don’t know. Perhaps with everything that has gone on in the last 12 months ( losing Willow, Pam, Gran, mum having cancer – now in remission) it’s all the stress just being released. I often wonder how it is possible that I can shed so many tears for a dog that was in our lives so briefly but he wasn’t a dog to us. He was our boy and the pain of saying goodbye is something I will never get over.

Losing Willow on December 15th was hard but she had lived for 11 years. In that time she had been pampered and showered with affection. She had fought many battles herself having cancer, a pyometra both of which could have killed her. I had a sneaking suspicion in the months before her passing that the cancer had returned but it was internal. I know people thought I was crazy when I voiced my concerns, like I was wishing her life away but I know my dogs and I know when things aren’t right. I have cried many tears over Willow but it is a different pain I feel with her passing. I miss her, I remember her fondly. The pain I feel with Travis is like a knife to the heart. The level of pain is not something that has ever gone away. I can talk about Willow without breaking down although some days it makes me feel terribly sad. Talking about Travis about 50% of the time will reduce me to tears no matter how strong I am feeling. It doesn’t mean I loved Willow any less, it just means Travis’ life was cut short and I mourn the time I should have had with him. However had he lived I would never have experienced life with Frankie, his nephew.

Poor Frankie and Mollie ( Trav’s sister) have been desperately trying to lick my face clean of tears all morning. I am trying to pull myself together because I know the sight of me breaking my heart is distressing them. I hate upsetting them. They are my last links to Travis, Mollie is his sister born a year later from the same parents and Frankie, Mollie’s son is his nephew. I never realised how much Frankie looks like Travis until you compare photos side by side. That’s probably why I dote on him so much. After Travis passed away I said I would never have another boy dog in the house and then after Frankie had been with his new owners a week he came back to us as the children were allergic to him. His owners broke their hearts when they returned him. I have never seen a man so broken by a dog ( other than Jay when Trav passed away and my dad when his beloved Esme passed away). I shed a tear with them. At that point I was resolute that Frankie would be sold. Within a few days I knew I could never let him go.

And now Frankie is 12 and not in the best of health, Mollie is 14 and still bouncing around like a puppy but deaf as a post. A few days ago on her walk she was playing with another Weimaraner half her age and giving as good as she gets. Yes I will be devastated when pass away but I know that they lived full lives, surrounded by people who love them. Travis’ life was cut tragically short and I think that’s why I find it so hard to deal with.

I hate October particularly 17th and I probably always will. 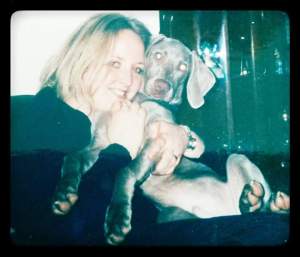