Last week Mr Myasthenia Kid was on holiday, so it meant we had to catch up on some jobs around the house that were long overdue. The problem with this is that it leaves me utterly exhausted / in lots of pain when he goes back to work. The work over ran into yesterday so my hands are killing me, so for word count this post maybe a little light.

The wood work in the house has been crying out for some TLC for a while. We both hate using gloss paint and over the last 15 years we’ve never managed yet to paint anything with gloss without ending up with dog hair stuck to it. One of the mutts always manages to brush up against it. We have tried quick drying gloss and the same thing happens. So this time we decided to use Eggshell as it would dry quicker, it may not be as hard-wearing as gloss but it doesn’t smell as bad and dries an awful lot quicker.

The house we live in was 30 years old last year. Before we bought it the property had been rented out, DIY jobs had been done on the cheap by the landlord and the renters. So the stair bannister instead of being sanded properly before being repainted just had layer upon layer of gloss on it. It was starting to peel off in great big chunks and the paint underneath was various colours which was down to the age of the paint being used. So before we could paint the banister it needed to be stripped of all the flaking paint, in a lot of places that meant taking it right back to the woodwork. I helped where I could but on the day after I had done an awful lot of sanding I ended up feeling horrendous. I hurt everywhere and all I could do was lie on the sofa feeling sorry for myself. I have to pace myself or my body will make me pace myself by shutting down and making it so that I can’t move.

Finally yesterday after two coats of undercoat and two coats of eggshell the bannister was complete. I can barely move my fingers today as they are so swollen with having gripped a paintbrush yesterday They are also red and swollen. So today will be a very lazy day today for me.

This is the before (taken in December)

You can see that the banister is a variety of colours – this is where paint has been flaking off and I had started it myself and then quickly realised that I would be unable to tackle this by myself due to my health.

This is after – we still have to stain the wooden post tops, we are still deciding what colour to stain them but it looks an awful lot better than it did. I am really pleased with what we have done.

I thought as well I would give you a quick update on what I have been doing sewing wise. On Friday 13th April I bought myself an overlocker, (in June I will be going on a course to learn how to get the most out of it). An overlocker trims excess material with a blade and also finishes your hems in a much more professional way. It can also be used to stop fabrics fraying. 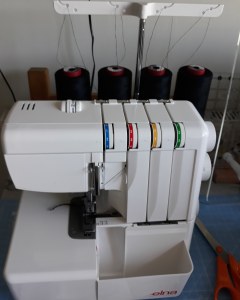 The following Monday I plucked up the courage to thread it – an overlocker takes anywhere between two to five threads. Mine takes 4, so it has two needles and two loopers. It’s a bit more complicated than threading a sewing machine but it’s not too bad as long as you follow the instructions and just take it slowly. On the Tuesday I decided to make a large box cushion for the dogs wicker basket. I have been meaning to do this for ages but the fabric I wanted to use had a really horrible habit of fraying quite badly. On all the cushions I had made out of it I had to use an overcasting foot on my old sewing machine to ensure that the hems didn’t fray. The overlocker made the job really neat and tidy. I used it to neaten all the edges of the fabric before sewing it together on my sewing machine (using a jeans needle as the material is quite thick as it is upholstery fabric). I finished the back of the box cushion using kam snaps so that it can be taken off and put in the wash. 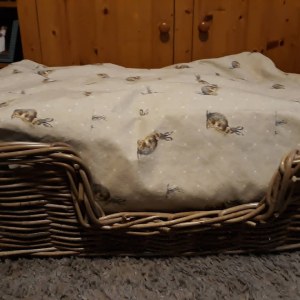 I have also been working on some hand sewing and making a quilt using a technique called English Paper piecing. This is where you use paper or card templates and either glue / sew baste ( tacking stitch) the material around the template. Then you sew the templates together to create whatever design that you want. I am using  Octagons and small kite shapes to join them together. On the top I am using small triangles to straighten the top edge and doing the same down one side. My plan is to have 100 Octagons on it and it is for Mr Myasthenia Kids bedroom. I am going to use an old star wars duvet to back it. I am using all my scrap materials to make it and I am finding it very therapeutic to sit and sew in the evenings / afternoons. 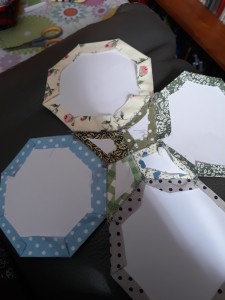 I also made the second piece of clothing I have made. A Julia Top, unfortunately it is too big and too short but it was a trial run. I am thinking of turning it into a jacket / cardigan. I used my overlocker and sewing machine to make it.

Sorry this week is a bit of a mish mash of stuff that has been going on over the last few weeks. My mood is still very up and down but it isn’t the crushing lows I have been having and my anxiety is settling down becoming easier to manage. So this week is a week of bits and bobs.