This week has been a bit up and down health wise and emotionally. For a few days out of the last week my back has been exceptionally painful, with no position be it standing, sitting or lying providing any comfort. Insomnia was back with avengence resulting in me ordering a new fridge freezer at 5am on Friday morning having been awake since 3am. Saturday I was struggling to breathe a problem I haven’t had properly in years. Eventually after the second dose of mestinon it eased but for a while there I was fully expecting a trip to hospital.

I have been waiting for my health to take a nosedive, you can’t be through the sheer amount of losses Jay (Mr Myasthenia Kid) and I have through December and January and walk away unscathed. Jay had to see his consultant dermatologist this week as he suffers with Psoriasis. In his follow up letter it stated  his Psoriasis was flaring up due to “ major life events” it was only then when I saw that it black and white that I even began to acknowledge that what we have just been through isn’t normal and isn’t just one of those things. I excused myself for having a bad day last Thursday and spending most of it in tears. I accidentally called Frankie, Willow. His face lit up like Willow was going to walk through the door at any minute and my heart broke all over again. I hated the fact I had lifted his hopes up, when she will never be coming home.

So due to all the emotional fallout of the last week and not being particularly well things have been quite slow on the sewing front. I have had a couple of days where I haven’t sewn at all. I won’t lie I am struggling a bit under the weight of it all. However there are some exciting things happening in the future which I have to keep under wraps at the moment. As soon as I can share I will. 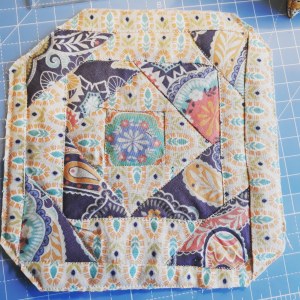 This was my first attempt at using my creative grids pineapple trim tool. For those of you who don’t know about quilting each style of quilt has a different name. This is a pineapple block, it needs a lot of work!