Last week was a bit of a nightmare. I was so fatigued it was ridiculous. I was sleeping hours but still felt like a zombie when I awoke. My legs felt like they were made of lead. My brain was sending the messages to them to move but they would refuse, causing me to fall over. When I could move them they felt as if they were made of lead. Climbing the stairs (which I limit anyway) felt like I was scaling mount Everest. Then on Tuesday afternoon, I recognised a feeling that I haven’t had in a long time. My face, eyelid and eyebrow were beginning to drop. I ended up going to bed for a lie down and slept for three hours. When I awoke the feeling was gone and I was relieved to have dodged a bullet. But I hadn’t, when I woke up on Wednesday morning this had happened.

Now I have a level of Ptosis everyday, normally unless you were specifically looking for it you wouldn’t know it was there. My eyelid droops to where the pupil starts to become obscured. That level of Ptosis I can cope with, it doesn’t affect my vision and it doesn’t tend to make me feel unwell.

Wednesday morning I woke up feeling horrendous, arms and legs both felt like they were made of lead. I was dizzy and due to my eye being nearly completely closed I couldn’t see very well. My forehead felt as if it was being ripped in two, with my left eyebrow arching in an attempt to keep the right eye open, only it was failing miserably. After a couple of hours I decided this really wasn’t worth the hassle of trying to stay out of bed. At 8am (I had risen at 6am) I gave up, took some HuzerpineA (like a herbal Mestinon as I can’t tolerate the real stuff) and set my alarm for 9am hoping when I woke up the Ptosis would be gone.

I gave myself an hour as like Mestinon this stuff takes about 20-30 minutes to get working. Plus I was also having a friend over, so needed to be washed and dressed before she arrived. I naively thought an hour in bed would be the magic cure. What an idiot! When it’s bad like this even proper Mestinon can fail to work. I should have realised when my alarm went off, that this was not a good day. I never fall straight back to sleep after being up for a few hours. I messaged the friend to advise them I would have to cancel, something I hate doing as it means I have knackered their plans for the day. She was absolutely fine about it but it doesn’t stop the guilt over cancelling. I text my husband to let him know I would be staying in bed for the day and that I might need him home if things got worse. I then went straight back to sleep.

Most of Wednesday was spent asleep if I am honest, I have a few brief periods awake mainly to get something to eat and have a cigarette. The fact that I was so utterly incapacitated scared me. This reminded me of the bad old days when I first got sick in 2007. How I had gone from working full-time to a year later being ill-health retired. I hadn’t been this sick what I call MG sick in years. Probably close to nine years, so you can imagine my shock, when this came totally out of the blue.

Thursday I woke up feeling an awful lot better but then by the afternoon was back in bed on home oxygen. I couldn’t take a deep breath in, as my chest just felt like it couldn’t expand. This really scared me as I have been blue lighted to hospital barely conscious due to breathing difficulties. This was exactly how it had started in 2008, I tried to walk across the lounge floor but stumbled as my legs wouldn’t work properly. The following day whilst hubby was out getting some shopping (helpfully forgetting to take his mobile phone) I had collapsed unable to take a proper breath in. I’d had to call 999 myself, trying to stay calm whilst the supply of oxygen in the house felt like it was running out.

There have only been a few times in my life I have been utterly terrified by my symptoms and that was one of them. I ended up being wheeled straight into resus, placed on oxygen running at 15 litres a minute and I still had very poor oxygen saturation. They  discussed with me about putting me into a medically induced coma and putting me on a ventilator. They wanted Jay to be at the hospital, I now realise it may have been to say goodbye, at the time I was oblivious and said he had to look after the dogs. I look back now and it moves me to tears. I wasn’t frightened at the time I was just exhausted from not being able to breathe.

I had all this running through my head again on Thursday, thankfully within two hours I was feeling much better but I had to spend the rest of the day in bed. 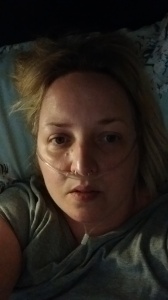 Gradually I have improved and back to my normal (but limited) levels of activity. However I am still having days where my arms and legs are refusing to work the way that they should. Today I was trying to do stuff around the house and I kept falling over my own feet as they felt as if they were stuck to the floor every time I went to move. I have started choking again (frequently) on fluids, something which hasn’t happened in a really long time.

It’s frustrating that despite in many aspects of my health improving a great deal, no more headaches, much less joint pain since giving up dairy, that this has started up again after leaving me alone for such a long time. Thankfully I have a hospital consultants appointment coming up at the end of next month and I will be able to discuss it with him then. I think it maybe time to bring up the possibility of Myasthenia Gravis again as seronegative MG seems to be much more accepted than it was ten years ago.