I am not very good with change these days, when I worked it was a culture of adapt or die as things changed constantly but when your world is as small as mine changes happen less frequently and when they do they can rock your world.

For the last 20 years I have had the same neighbours. When I moved into my flat back in 1996, my neighbours rented the flat below mine. When we moved to our current location I had no idea that my old neighbours would be living next door. We laugh about it and say that I am stalking them but it was purely chance. They lived on the street I wanted to live on but when they moved I had no idea where they had moved to. So when we were looking around the house for the first time P stuck her head out of the bedroom window and accused me of making the house prices drop. We have been good friends with our neighbours for years and know that should we ever need them day or night they would be there for us. As they proved the night or more correctly 3am in the morning six years ago when Jay was hit by a drunk driver in a stolen car. Having no family in Exmouth means that we rely on friends to help us out. Our friends have become like an extended family, so it has been very hard to accept that this will no longer be the case.

On 30th November P let me know that her tenancy had been terminated. Through no fault of their own they would have to move, the landlord had decided that a member of their family needed the house and now P and her long-term partner would have until the end of February to vacate the premises. Obviously it has been a deeply stressful time for them both, house rental prices in Exmouth are astronomical, when you add in agency fees and the cost of moving, it makes it very difficult to find somewhere. Thankfully they have but hubby and I are left without them. They will still be in Exmouth but currently it feels to me like they may as well be moving to the other side of the country. It seems selfish to be sad that they are moving when it is their lives that have been turned upside down but I hate it. I have been left feeling very unsettled and it’s not the only change I have had to face.

A few weeks into December we received a letter from our doctors surgery that informed us that our gp was leaving the practice mid February. Our doctor is one of those gp’s that goes above and beyond for us. He is the only one that has ever understood the stress placed on Jay looking after me. Whenever I speak to him he always asks after Jay and he does the same when hubby speaks to him. If I ring to speak to the duty doctor he always rings me back, as he knows all my drug allergies and various medical problems. We know that whenever we need him he will be there and now he is going. I am terrified of what my new doctor will be like, my current gp has learnt alongside me as I have been on my journey of understanding EDS and PoTs / Dysautonomia. When he took a sabbatical last year he worked as a gp in a different part of the country and diagnosed a young woman with EDS. He proudly told me this when I saw him on his return, he told me if he had never had me as a patient that wouldn’t have happened. That was a really nice thing for him to say. I know he’s not a friend he is our doctor but I am really going to miss him. With both him and my neighbours leaving it feels like our safety net has been pulled out from under us.

I can’t say that I see our neighbours or our gp on a regular basis but the thing is I know they are there if I need them. When things go wrong I know if it’s medical I can call the surgery, if it’s something to do with the house I know I can rely on P’s partner to help. Numerous times he has helped us decorate, nail down flapping fence posts and rescue the dogs on the night Jay was hit by another car. They have acted like family, I am worried that we will lose that when they have moved.

I know they aren’t moving to the other side of the planet but I also know how easy it is to lose touch with people. I experienced it myself when I moved from Plymouth to Exmouth. I tried keeping in touch with my friends but it felt like it was all one way traffic. Unless I rang them I never heard from them, I guess it was out of sight out of mind. I have also had friends leave the workplace, still living in Exmouth but you lose the friendship when you don’t see each other everyday.

The change or the prospect of change has hit me hard and now my anxiety levels are through the roof. I am no longer sleeping properly (I haven’t done since P told me the news on 30th November) and I find myself getting anxious over the slightest thing. My anxiety is waking me from sleep and I am constantly having my stress dreams where I am trying to read a book but instead of letters there are symbols and the pages are turning too fast for me to read what is on the page. I get so annoyed with these dreams that I wake myself up, which then leads to less sleep, which then leads to an increase in my pain levels. I just can’t seem to win at the moment.

I am however winning on the gluten-free front. I have had around a week now with no stomach pain, diarrhoea or excessive wind. It seems really weird not to be guffing all the time, just goes to show what a an old wind bag I was previously. It is really weird not having a stomach that blows up the minute you eat or drink anything. Since giving up gluten I have also had no reflux whereas over Christmas I was waking up during the night with a mouthful of vomit, choking. My skin rashes are also clearing up and my hidradenitis suppurativa has also improved. I don’t want to say my HS has gone as I will end up with a very painful abscess
This week is a busy week with a gp appointment (probably the last time I will ever see him) and I have my caffeine infusion on Thursday, today if you are reading this blog on the 12th January. I class any week with more than one appointment in it as a busy week as I will need several days to recover afterwards. 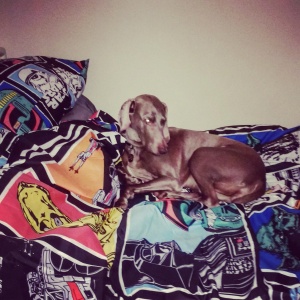