This was written a couple of weeks ago, then my body decided to take a break so it wasn’t published! I also need to state for the record I have received no payment for any of the products / items featured in this blog post. They are all gifts from friends and family.

In this past week it’s been both mine and the hubby’s 42nd birthday. We literally can say that we are 21 again. Twenty-one seems so far away from where I am now. I was at university completing my degree, living at home and working my part-time job. How life can change over a period of 21 years, in ways you never thought possible.

I used to hate birthdays, I haven’t always I have just hated them since I got sick as they were the mark of another year passing by. Since my 40th birthday I have been making much more of an effort with them and they have been much better. We didn’t go down to Plymouth this year I am still too sick for that currently however as my new consultant is based in Plymouth we will be making that journey at the end of the month, when I have my first appointment with him.

My birthday was manic, it was probably quite a sedate affair by most people’s standards but it felt from 11:30am onwards that I barely caught a breath. I had a wonderful surprise visit from a friend at around noon. She bought me a little birthday cake, with the hilarious note on it, see below 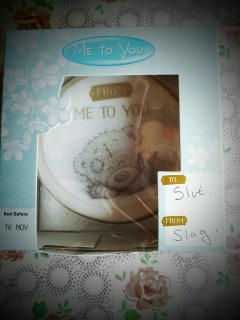 She told me she had surprised me as she didn’t want me running about trying to sort out the house before she turned up. She did take me by surprise as when she arrived I was still in my pj’s. It was lovely to see her and I am so grateful to her for coming over. I am lucky that I do have some brilliant friends, who make the effort to see me, when as I wrote in my last post due to depression I haven’t been brilliant at keeping in contact with them.

The absolute highlight of my birthday was having my six-year-old nephew sing happy birthday to me down the phone. He is now at an age where you can hold a decent conversation with him. He says Auntie Rachel in such a cute way my heart melts. He finished his singing with “I love you Auntie Rachel”. He also wrote my birthday card out and his writing has come on so much in the last year, it made me very proud of him. His uncle also had the same phone call the following day and I know hubby was very chuffed when he was told “I love you Uncle Jamie and I like you”. I was gutted I am loved and not liked, hubby and I are so competitive.

My adorable nephew also chose some of my presents for me (with the help of his mum), this beautiful scarf with foxes on (I love foxes) and  purse (which isn’t pictured). 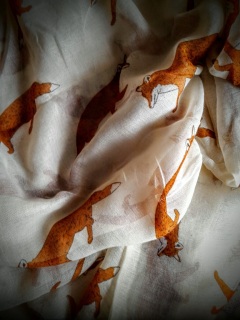 I was truly spoilt on my birthday, hubby with the assistance of our friend bought me some Mac Foundation and some concealer ( something I have been wanting for a while). As my husband is utterly useless at gift buying unless he has a list, which kind of takes the surprise out of presents but saves me from god awful gifts, he enlisted the help of a friend who picked out some lovely bits of makeup and beautifully wrapped the presents as well. I have told her to just say no if he tries to do the same at Christmas, as it would ruin Christmas morning if I couldn’t take the piss out of his gift wrapping skills!

The photo also contains two eyeshadow palettes that my sister bought me for my birthday and I absolutely love them. On the back it tells you where to put each colour to create some really fabulous looks. They are also in colours I wouldn’t have been bold enough to choose but they really suit me.

My parents bought me something I have coveted for years, an Emma Bridgewater mug with my name on. Unfortunately whomever was responsible for painting my name on the mug decided to add an extra “A”. I was gutted to find that my name had been spelt wrong when I opened the parcel. I got straight on the phone to Emma Bridgewater customer services. I have to say a big thank you to the lady who sorted it out, I have another mug coming to me as priority (normally the personalised items take up to two weeks to be dispatched). This was all completely hassle free and I don’t even have to return the incorrectly spelt mug, which I have decided to keep because a) it makes me laugh every time I see it and b) it is a thing of beauty!

By the time I started finishing off this blog post my mug had arrived (it took around a week. So here is the correctly spelt mug below! I love them both.

My husband had no clue that I had also ordered him a personalised Emma Bridgewater mug with Dinosaurs painted on it. He maybe 42 but he still loves talking about dinosaurs with his nephew! Jay loved it, on the bottom of the mug I have also had painted on the message “I love you xx”, so when we are having a cup of tea he can flash me the bottom of the mug.

There are too many gifts to photograph but amongst them was an A-ha CD of them live in concert, a beautiful bouquet of flowers (and they are still going strong!), a box of luxurious chocolates (now eaten they didn’t stand a chance really) and many other gifts. I was well and truly spoilt, writing this blog has made me realise how lucky I am to have such great friends and family.

A quick health update – my prolactin levels have now gone back to normal, my gp believes that I may have PCOS and I need a blood test to check the level of testosterone in my blood.

My Menieres disease attacks have now dropped to just one a week on a dose of 32mg of Betahistine 3 times a day. When I do get attacks now they are less violent. Over the last few days my tinnitus levels have dropped as well. Fingers crossed I am going to have a bit of a break from it all.

Next week I am having a DXA scan of my bones. As I have EDS my bone density will drop significantly after the menopause so they need to do a scan so they have a baseline. Also because we don’t know how long my prolactin levels were raised for I could have lost bone density so that also needs checking out.

My PoTS is playing up quite a bit at the moment so that is annoying but I see my new consultant in a few weeks.