So sorry its taken me an absolute age to get my butt in gear and get these photos on for you! I’m really pleased with the garden this year, its looking the best it has in ages!

The picture above is of a clematis that has survived despite all the accidental attempts I have made trying to kill it! Every year it bounces back, forgiving me for my ignorance yet again! I only have one flower on it but I think its beautiful.

This is the pot that the clematis is in, the ferns have self seeded themselves and they were so pretty I decided not to get rid of them. I think the ferns must have come from bird droppings as my next door neighbour has lots of birds that visit her garden. The pink flowers are begonia’s, some of these have done really well others look a little pitiful!

Our mini green house has a plastic cover that we can put over it when planting early on in the year. Normally we plant a mixture of salad leaves, radishes and spring onions in the trays. However last year I lost my entire crop of salad leaves to Cabbage White caterpillars, there were so many caterpillars on the leaves that you could see them moving whilst stood in the kitchen. My radish crop was lost to our eldest dog Mollie who brought a whole new meaning to pick your own! Whole trays of radishes would just disappear! The same has happened with the strawberries, hubs and I haven’t had a look in! The mini greenhouse has been planted with lobelia and begonia’s. I think it looks lovely and really brightens up the garden. It takes a lot of watering as the trays are quite shallow and they dry out very quickly.

I have included this picture with Hubby’s Everton Gnome as once I had finished taking pictures I sat in the garden. As I did so a bright orange butterfly – a type I don’t recall ever seeing before – landed right on the end of the gnomes nose! I was in hysterics as it looked so funny. Before I could grab the camera to capture the moment it flew away! I was gutted! 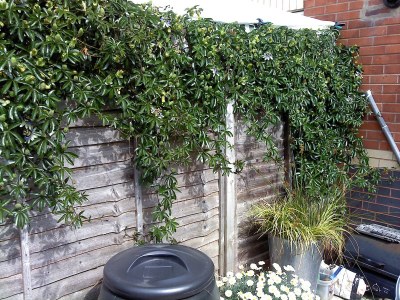 This is a shot of my neighbours magnificent Passion Flower that trails over our side of the fence and is simply stunning. Its quite funny as when my neighbour bought this plant two years ago for 10p at a car boot sale her partner told her it was diseased and would never grow! Thankfully she ignored him and its gone from strength to strength. She keeps telling us she’s going to charge us a lending fee for having so much of her glorious plant trailing into our garden. A little further down the fence we also have her honeysuckle trailing into our garden. Unfortunately I didn’t manage to get a photo of it whilst it was in bloom. The scent that came from it was amazing, it used to fill the whole of the downstairs of our house every morning.

I have a few more photos to post but I will do that later in the week! So as promised an update on the garden part one.

4 thoughts on “As promised Photo’s of the garden!”